Disclaimer: Some of the links below are affiliate links. This means that if you buy anything we will receive a commission for the sale. Nonetheless, we recommend these tools because we find them great, regardless of whether or how much they pay us.

For something that looks a lot like a metal toothpick, the barbell is a solid piece of exercise equipment.

The bar-weight combo targets multiple parts of your body at once, helping you sculpt your physique in just a few moves.

So, if you’ve been thinking of improving your workout routine, these best barbells for the home gym are a great place to start.

The Best Barbell for Home Gym, My POV

The barbell set I recommend for daily use is the X-Mark Fitness Lumberjack Olympic Bar & Weight Plate Set.

From the plates to the Olympic bar, the barbell is designed to improve workout posture and increase strength due to its solid construction.

Specifically, the marks have taught me how to grab the bar correctly, and the plates are so well-proportioned that they keep me balanced during each session.

The price is somewhat punchy, but it’s well worth it because:

Other names on my list including their accessories are:

What You Need to Know Before You Go Barbell-Shopping

Picking a steel bar and a set of weight plates may seem easy.

But, due to the various factors that come into play when it comes to building such equipment, it’s easy to get lost and pick a wrong model.

So, here’s what you need to keep in mind before you go barbell-shopping.

Usually measured in kilo pound per square inch (KPI), tensile refers to the weight that a bar can take before it breaks. A decent KPI ratio for someone who’s just starting is 160 and up.

But, if you want to take your game to the next level, I’d recommend you start with a barbell of 195 KPI and work your way up.

Even though many confuse this feat with the little markings on the bar that prevent slippage, knurling in barbells is an entirely different deal.

The term actually refers to the grip space available.

So, barbells with heavy knurling have plenty of room for a firm grip and could be used by guys with big hands.

Another upside to this feat is that knurling also shows you exactly where to put your hands when you’re lifting.

This way, you could avoid a series of potential injuries.

This term refers to the actual weight that a bar can handle before it starts bending.

So, if a bar has a yield of 150 pounds, it means anything more than that, and it’ll begin to bow out of shape.

The whip of a barbell refers to the way the bar bends when you use it.

So, if a bar has a low whip, it should be solid as a rock during use.

On the flip side, barbells with a high whip tend to be flexible.

Since this can be a tricky part, make sure you choose a bar that matches your program’s intensity to avoid getting injured.

As the name implies, the spin on a bar refers to just how much the shaft rotates.

This is a must feat for anyone who’s doing exercises that employ the entire wrist.

This way, the bar does most of the twisting for you, and your wrist doesn’t feel the strain.

The last (but not least) thing you watch out for is the type of the barbell.

Depending on your fitness goals, there are plenty of options to choose from.

So, make sure you pick wisely.

Olympic barbells, in particular, are heavyweight pieces of equipment as they don’t go below 185KPI.

More than that, they come with a high spin to accommodate the lifter’s need for intense wrist movement.

They also have a high whip to allow you to manipulate the weight more easily.

Trap or hexagonal barbells, on the other hand, are less heavy-duty.

As their name implies, they feature a hexagonal frame that you step into.

So, you basically grab the bar with your hands by your sides and not in front of you, which means you apply less pressure on your back.

Since they make it easier for you to do the whole shoulder shrug thing, they are also an excellent choice for anyone who wants to work on his trap muscles.

Note, though, that they have zero spin and minimum whip, so they still need your fair share of attention.

Power-lifting barbells are perfect for exercises that focus on weight-stacking like the back squat, deadlift, and the bench press.

This type of barbell has a high yield and very low whip to grant you full control of the bar.

They also have minimal spin as you don’t need to move around your hands all that often.

Some models also come with knurling in the center of the bar.

All-purpose barbells usually match the needs of the average Joe.

In fact, they are specially designed to help you build muscle and perfect your form with no unique feats involved, whatsoever.

This type doesn’t go heavy on knurling and spin, but it does come with a decent amount of whip.

A replica of the equipment that pro weightlifters use, this Olympic barbell was my first choice when I started building my home gym.

That’s because it provided me with all the base lifting equipment I needed, except for the bench.

But, convenience aside, the barbell set has a max capacity of 300 pounds.

You don’t have to go all out at once, though, as the set comes with several removable weight plates, allowing you to adjust the weight based on your strength.

The collection also includes a 7-foot Olympic-grade bar with decent knurling and spin to prevent injuries.

It also comes with 14 weight plates, ranging from 2.5 to 45 pounds, and a pair of high-quality spring collars that make sure the plates stay put during lifts.

Both the bar and the weights are made of cast iron, which means they’re in for the long-term.

The bad news is that they aren’t coated with rubber, so they may rust if they’re regularly exposed to humidity.

Designed with top-notch performance in mind, every detail on this barbell is there to improve your workouts, from the moment you start to the moment you finish.

The Lumberjack set includes a 7-foot Olympic bar and 18 weight plates with a total capacity of 365lbs.

The bar, in particular, features a specially designed shaft with semi-aggressive knurling that ensures a steady grip.

It’s also engraved with distinctive marks that show you how to grab the thing to avoid hurting your legs, knees, back, or arms.

Since it’s an Olympic barbell, it also has excellent spin, which minimizes the strain on your hands and wrists.

Its chrome sleeves also guarantee a smooth loading/unloading when you insert or remove the plates.

And speaking of the plates, they feature a stainless steel hub in the center, which doesn’t just make loading/unloading more manageable, but it also keeps the bar’s sleeves intact.

The plates are also made of cast iron and are coated with rubber, so they’re pretty much synonymous with durability.

The one thing I didn’t like about this set was the intense smell of the rubber, but it went away after a while.

Weighing in at 44 pounds and capable of holding up to 600 pounds, this Body-Solid best-seller is designed for super-heavy workloads.

When I first laid my eyes on it, I was hesitant to buy it as my strength wasn’t up to snuff with its potential.

But, since its user-friendly design allows me to add and remove weights whenever I want, I gradually worked my way up to the top (still do, btw).

The bar is 7-feet long and completely straight, which means it has a low whip and could be challenging to manipulate at times.

That said, make sure you increase the weight gradually. It also has two knurled grips that keep the thing from sliding through my fingers. #BetterBeSafeThanSorry

Even though it doesn’t come with an extra set of spring collars, it features a shoulder bolt and an inside sleeve, which keeps the weights steady.

But, even so, I still attach my own collars when I’m using it.

As much as I enjoy lifting weights Olympic-style, there are times when I want to give my back a break.

On those days, I switch to this trap bar, which is known for working as efficiently as straight bars.

Due to its hexagonal design, the CAP bar places the entire weight of the barbell in line with my body, and not in front of it.

It’s also made of steel and coated with zinc, which means that:

To talk numbers, it can handle up to 750lbs, which is way more than most commercial bars can accommodate.

Also, note that the sleeves are about 9 inches long. As a result, you can fit more than two weight plates in each.

For some reason, the bar dents easily, so I’d advise you not to throw it violently on the floor at the end of each set.

Picking the right bar is one thing, but choosing a set of weighted plates to match in quality is a whole other story.

That’s why I did my research before I invested in my first pair and found out about these Day 1 Fitness plates.

After using them for a couple of months now, I can say with confidence that they are as close to premium as you can get.

For one, they’re made of heavy-duty stainless steel, which is a synonym for “durability,” no matter how you see it.

They’re also covered with high-grade, low-bounce rubber, which means they can withstand drops without ruining the floor or making too much noise.

They also sport a steel inner hub, which helps me glide them on and off the bar without scratching it in any way.

But, what I like the most is their steel ring insert in the middle, which due to its design, prevents the plates from moving around when I lift.

So, you can choose based on your strength and workout routine. What I didn’t like, though, was the product’s retail price, which was quite high. But, I guess you get what you pay for.

Safety always goes first – which is why I don’t ever lift without making sure the weight plates are secured in place.

That’s where these barbell collars step in.

Unlike any other spring collars I’ve ever used, these clips fit any barbell size, which is great because I don’t just use one type of weight plates when I’m working out.

The best part is that they sport a one-click lock, so it takes me mere seconds to remove and attach new plates.

They also feature a smooth nylon exterior, which means they don’t scratch or damage the plates in any way.

What impresses me the most, though, is the snap-latch jaw they have, making them sturdy enough to withstand the maximum of weights.

So, in your opinion, which is the best barbell for a home gym?

Let me know in the comments below! 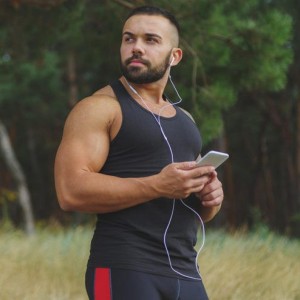